What Goes Into Your Food? 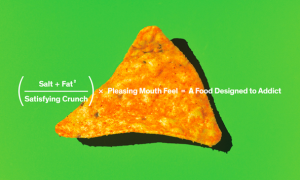 Two new books about processed foods can give us insight into what goes into the design, manufacture, distribution and marketing of “foods” most of us eat. The products described are so ubiquitous, unless you only eat meals cooked from whole food ingredients, you are consuming them.

Pandora’s Lunchbox is written by Melanie Warner, who spent a year and a half researching this topic by spending time inside processing plants to learn about the murky and convoluted world of soybean oil, milk protein concentrates, and petroleum-based artificial dyes. The Huffington Post published an interview with Melanie called What You Don’t Know About Processed Food and asked her questions about what she learned from speaking to food scientists, what she uncovered about regulatory loopholes in food law, and just how little we know about many of the food products on supermarket shelves.

The New York Times Magazine recently published an in-depth article, The Extraordinary Science of Addictive Junk Food, which is adapted from Salt Sugar Fat: How the Food Giants Hooked Us, a new book by Michael Moss. Moss describes in detail the steps food processors have taken to give us what we want, at the expense of our health. And the result? “Today, one in three adults is considered clinically obese, along with one in five kids, and 24 million Americans are afflicted by type 2 diabetes, often caused by poor diet, with another 79 million people having pre-diabetes. Even gout, a painful form of arthritis once known as ‘the rich man’s disease’ for its associations with gluttony, now afflicts eight million Americans.”

Thankfully, all packaged food is required to have a label that describes what has gone into it. There are confusing and confounding terms, to be sure, but a safe bet is that if you’re not familiar with every ingredient on that list, what you’re considering eating is not healthy. As Michael Pollan would say, “If you can’t pronounce it, don’t eat it.”