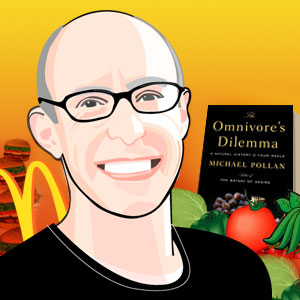 Michael Pollan is starting to become a household name. Not only has he written a number of best-selling books on the topic of food, and has now been involved with two documentaries (King Corn and Food, Inc.), but he’s becoming accepted by the mainstream media. He’s made appearances on Martha Stewart, Oprah, The Daily Show with Jon Stewart, The Colbert Report, Bill Maher and Bill Moyers, among others.

His book, The Botany of Desire, has been made into a film that aired on PBS. Kati and I watched it and were very impressed by his exploration of how some plant species have done incredibly well for themselves by satisfying our desires. He points out that from the perspective of the plants, they have thrived because we’ve been doing their bidding! We invest incalculable resources into finding the most efficient way to feed them, expand their habitat, protect them from diseases and pests, etc.

Another benefit of taking the perspective of the plant is that we see the role we play as part of nature rather than separate from it. He summarizes his points beautifully in this passage:

“For me the most important lessons to take away from these tales is that we are not simply standing outside the web of life, but that we are a part of that web of life, and that everything that we do, what we choose to eat, what flowers we choose to put on our tables, what drugs we choose to take, these are evolutionary votes we’re casting every day, in many, many different ways.

When we use these metaphors and we talk about plants having a strategy to do this, or wanting this, or desiring this, we’re being metaphorical obviously. I mean plants do not have consciousness. But this a fault of our own vocabulary. We don’t have a very good vocabulary to describe what other species do to us because we think that we’re the only species that really does anything. But to the extent that you can put yourself in the place of these other species and look at the world from their point of view, I think it frees us from our sense of alienation from nature and we become members of the biotic community. One among many species, all of them together creating this wondrous web that we call life.”

Self-Care for the Holiday Season
December 1, 2017