Are You Prepared for the Upcoming Big Earthquake? 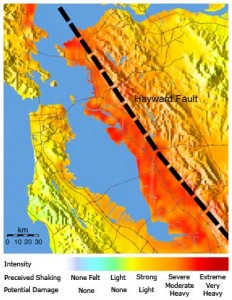 The next BIG earthquake is coming soon. Those of us who live in the Bay Area are accustomed to small earthquakes because the San Andreas Fault “lets off steam” by having frequent, relatively small earthquakes. But the Hayward Fault works differently. It builds up lots of pressure and lets it out with massive quakes every 140 years… and the last one was 143 years ago. It could come tomorrow, but there is a 99% chance that the Hayward Fault will have a 6.7 or greater quake in the next 30 years.

At the time of the last Big One, Oct 21st, 1868, the Bay Area had 1 percent of today’s population and resulted in 30 deaths, making it the nation’s 12th deadliest quake. Today, there are over 2 million inhabitants living along the fault, and the BART tracks crisscross over it repeatedly. BART officials are worried that with no early warning system in place (like they have in Japan) and BART train speeds in excess of 60 miles/hour, there could be many fatalities when the fault line shifts 6 feet along it’s axis.

All East/West oriented roads will be severely damaged (imagine them all with a shift of about one car lane) and so we can expect problems with all forms of transportation, affecting everyone, including the Police, Fire Department and ambulances. We may have disrupted electricity for days (or weeks) as we saw in Japan.

You must be prepared to take care of yourself with provisions like freeze-dried foods, water, and other essentials (clothes, personal care supplies, medications, etc.) so that when the next Big One strikes, you’re ready. And despite the fact that many resources recommend 3 days worth of supplies, we recommend having at least a 2-week supply of everything. There are also many options when it comes to amassing supplies, and having to figure out which is the best for you can be the thing that stops you from taking action. Here are a few recommendations based on the research we’ve done.

Water is the most important survival supply to have, and potentially the most difficult to obtain and store. If you are purchasing it rather than filling containers yourself, it is heavy, making it either expensive to have it delivered, or labor-intensive to pick up yourself. And if you are filling containers, it takes a long time fill 15 gallons worth, which is two weeks worth per person.  Also, it is recommended to replace the stored water every 6 – 12 months. And finally, purchasing glass or stainless steel containers to hold that much water is expensive, and as a rule, it is a bad idea to store water in plastic since chemicals from the plastic leach into the water (even BPA-free). In other words, you have to decide which is the best option for you.

Food is the next most important supply you can have, and it is also by far the one with the most options. The thing to keep in mind while you’re making your selections is that if the situation arises whereupon you have to eat this food, that’s all you’ll be eating for up to 2 weeks. How satisfied do you really think you will be with a cold can of beans? A great goal would be to simulate as much as possible what you already eat day-to-day, and it also might be nice to plan to have some comfort food in a time when it’s likely you’ll need some comforting.

Now that you know what kind of food you’re looking for, you need to decide in what form you want to store it. The cheapest and easiest form is cans from the grocery store. It is also the form that takes the most maintenance as it is recommended to replace canned food every 6-18 months.

A step up from that is dehydrated food, which has had all the water removed from it by applying heat. Generally speaking, dehydrated food is inexpensive, more-so even than canned food, but usually consists of only the basic ingredients (no sauces or multiple ingredients) and requires cooking. The shelf life for dehydrated food is more like 3 years, which is much better than canned food, but you may be required to keep a camping stove in your supplies and do a lot of preparation when the time comes.

The next step up is freeze-dried food, which is more expensive but it does boast superior taste, nutrition, and ease of use, only requiring the addition of hot water for a full meal. Freeze-dried food comes in 2 forms, pouches and nitrogen sealed cans. The pouches usually have 2-4 servings each and are able to be eaten right out of the pouch, which is much more convenient than having to deal with cans that hold 9-20 servings, however they only last 5-6 years as opposed to the cans which can last for 25 years or more. The increased shelf life of cans may balance out the higher cost in the long run. On the other hand, there is still the necessity of heating the water, for which you could buy special self-heating pouches, or pack a camping stove, or you could settle for cold water which will take longer and lead to a less satisfying end product.

Yet another step up are Meals Ready to Eat, or MREs. Originally developed for the military, one MRE contains everything you would need to be nourished for an entire day, from drinks and dessert to toilet paper and matches. Perhaps the most appealing feature is that they don’t require any preparation or the addition of water and come with special pouches that heat the food for you. On the downside, they are very expensive, come in packs of 12 predetermined menus (no picking and choosing), and are heavy and bulky to transport in case you need to evacuate. They also only have a shelf life of 5 years.

We’ve not been able to find organic options for anything other than canned food at this time, so please let us know if you find anything!

We concluded that we would start with buying cans from the store, as it was the easiest and meant that we at least had something right away. We then took our time to select freeze-dried meals that most matched our everyday diets, and threw in a few comfort items. You can decide what would work best for your family.

Here are some resources to help you and your family be as prepared as possible:

SFGate wrote a great article about earthquake preparedness, including a wonderful suggested list of supplies to prepare.

The city of Berkeley offers free community emergency training through their Community Emergency Response Team Training (CERT) program.
The County of Alameda provides great emergency information both for how to prepare and what to do during an emergency.
Learn how to be prepared during the first 72 hours of an earthquake.
The Red Cross offers classes and Information.

Self-Care for the Holiday Season
December 1, 2017