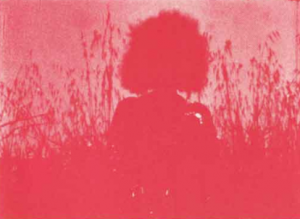 I’m very proud of both my parents’ accomplishments in the film world, and here’s your chance to see a sample of it. The Berkeley Art Museum and Pacific Film Archive (BAMPFA) has been home to both of my parents’ films for many decades, but they recently launched a new exhibit called WayBay (through June 3) that features SF Bay Area artists of the last 200 years, showcasing a combination of art, film, poetry, performance documentation, and archival materials.

The exhibit is organized unconventionally, by poetic theme, rather than by time period or geography. As you walk through the exhibit you’ll see a mixture of 2-D art (painting/drawing, textiles, photography), 3-D art (static and kinetic sculpture), film (some on wall-mounted TVs, some projected onto screens), and even a wall of postcards that you can take that feature stills from films. At one event I was invited to, they had an interactive component in which everyone was invited to use rubber stamps and paper to collaboratively build an art project.

Because my father, Scott Bartlett, received more critical and commercial acclaim than my mother, Freude Bartlett, I’m used to being asked for permission to include his films in both commercial and non-commercial projects, but this is the first time I’ve been asked about including a work of my mom’s since she died in 2008. As I walked around the exhibit, I realized that both of my parents’ films are not in the exhibit hall (but fortunately they are online, so I can share them here) but I did see their friend’s film, Riverbody, which includes a brief shot of both of my parents around the time I was born (1970).

To watch my parents’ films, click this link. My mother’s film is the 5th row down, the middle image labeled, “Sacred Heart of Jesus” (1965). Directly below it, in the 6th row the middle image is my father’s film, “Making Offon” (1980).